There’s never been a better time to take an epic motorhome or campervan road trip round Scotland to visit the Outlander film set locations.  Cast yourself back to the 18th century, the world of Claire and Jamie and experience many of the iconic sites that inspired the Outlander series and brought it to life.  Visit Lochs, Glens, Castles and towns and immerse yourself in a time gone by:-

Featured in the opening credits.  One of the most stunning and photographed areas in Scotland, famous for its mountains, such as Buachaille Etive Mor and its rivers and waterfalls of the Hidden Valley.  It’s both a summer and a winter playground for outdoor enthusiasts who enjoy skiing, climbing, walking and mountain biking. 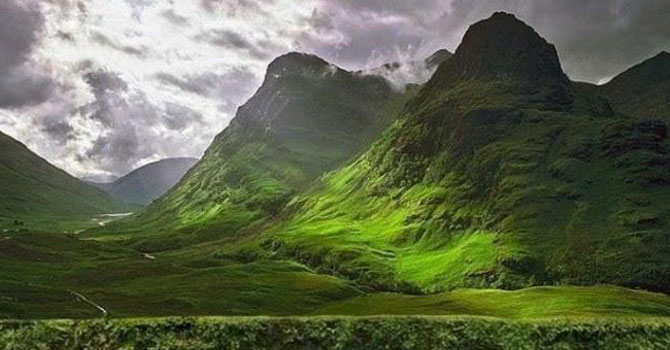 In the first episode where Jamie’s ghost looks up to Claire’s room from the Bruce Fountain.  A small village in Fife, which was used to portray the city of Inverness in the 1940s.    Claire & Frank stayed in a local B&B, which today is the Covenanter Hotel. 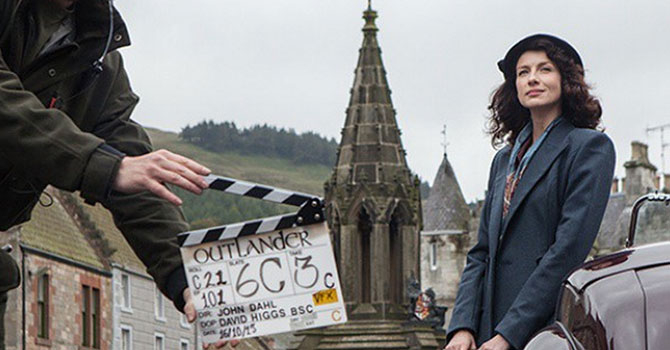 Castle Leoch, home of Colum MacKenzie and his family.  A medieval stronghold building in the late 14th century, Doune Castle is open to the public and one of the most popular locations to visit. 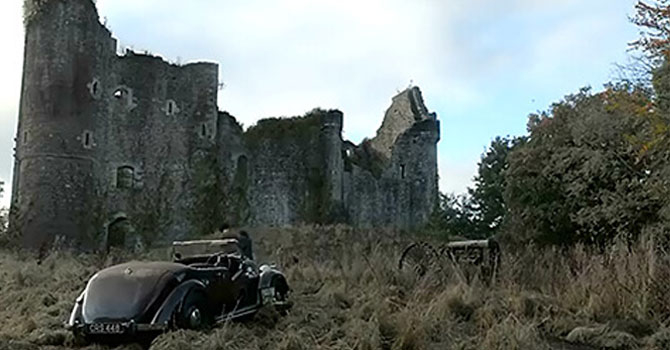 George Square is where Frank proposed to Claire in the 1940s and Pollok Park is where Claire gathered herbs in the 1700s.  At the heart of Glasgow city centre, George Square is home to an important collection of statues and monuments, including those dedicated to Robert Burns, James Watt, Sir Robert Peel and Sir Walter Scott.  The City Chambers is also located there and is a fine example of Victorian architecture.

Pollok is Glasgow’s largest park and home to the world famous Burrell Collection. 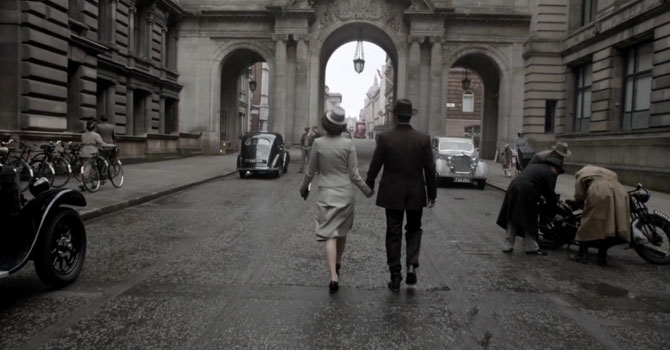 Cranesmuir, the home of Claire’s friend Geillis Duncan.  Wander around this charming town and visit Culross Palace, where Claire’s herb garden at Castle Leoch was filmed. 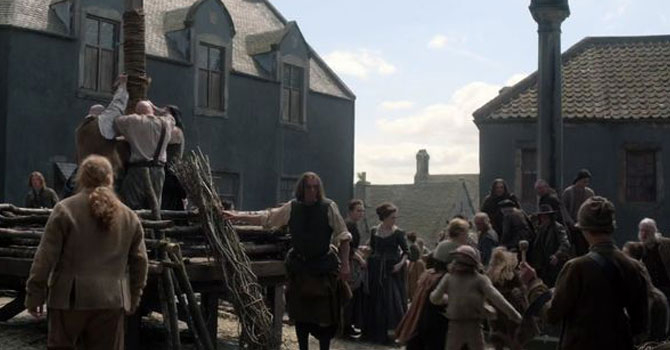 A 15th century castle situated on the Firth of Forth, which featured as Black Jack Randall’s Fort William base and also where Jamie was incarcerated.  Known as the ‘ship that never sailed’ because of it’s likeness to a ship. 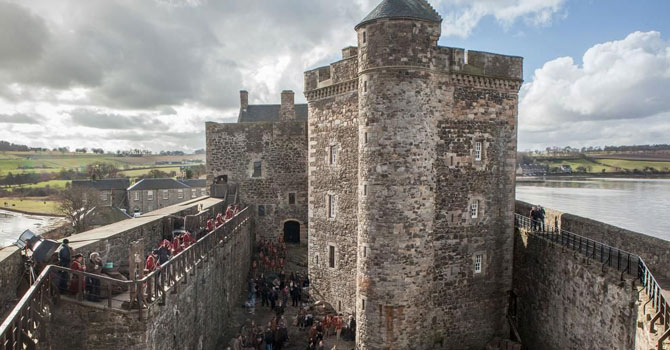 Depicted as the Home of the Duke of Sandringham, scenes from Series 1 were filmed in the Red Drawing Room.  Located on the outskirts of Edinburgh both the house and grounds are open to the public. 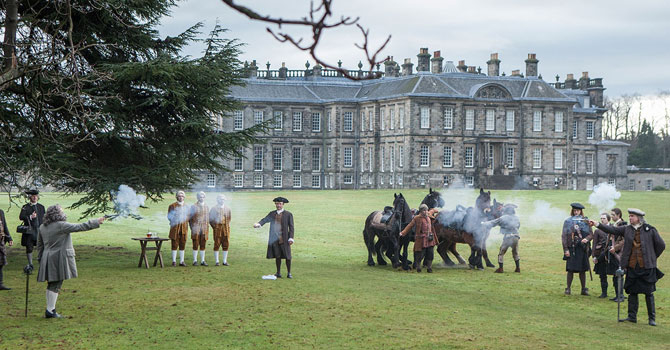 Situated with the Hopetoun House estate, this 16th Century Tower House, known as Lallybroch within the series, was Jamie Fraser’s family home.  A visitor’s pass must be obtained before visiting the castle 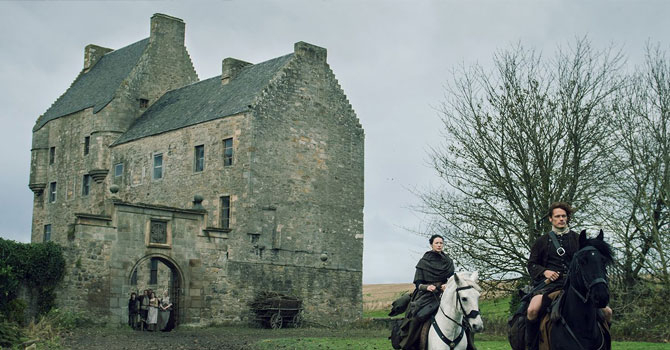 Wentworth prison where Jamie was tortured by Black Jack Randall.  This was the birthplace of Mary Queen of Scots. 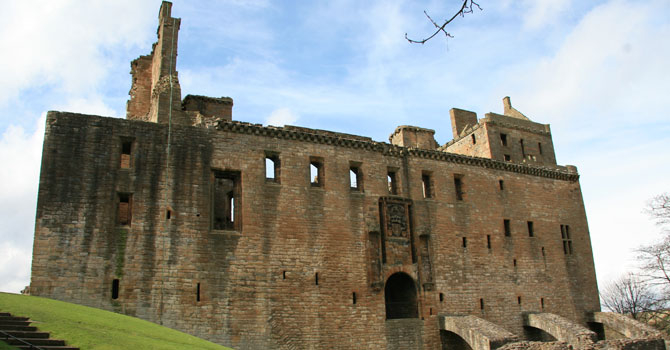 Versaille where Jamie & Claire attended a party in Series 2.  The gardens today are quite spectacular and can be visited from May to October. 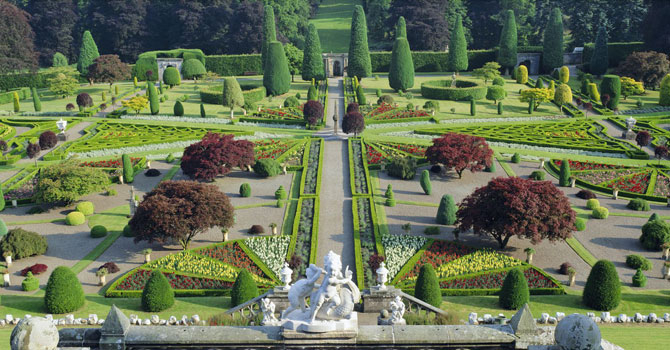