So today I persuaded the Scotsman to go for a little stroll. Well really to climb a big hill. We settled on Ben Loyal also known as the queen of Scottish mountains. The parking and route advice came for walkhighlands website which has a great range of walks for all abilities.

I hadn’t really figured in the Scotsmans bad hay fever or the fact that it was really really steep.
But someone had to do it, and Geordie girls are harder than they look.
So I left him at the first peak and carried on to he trig point on An Caisteal at 764m.
The views all the way up were fantastic especially the 360 degree panorama at the top. 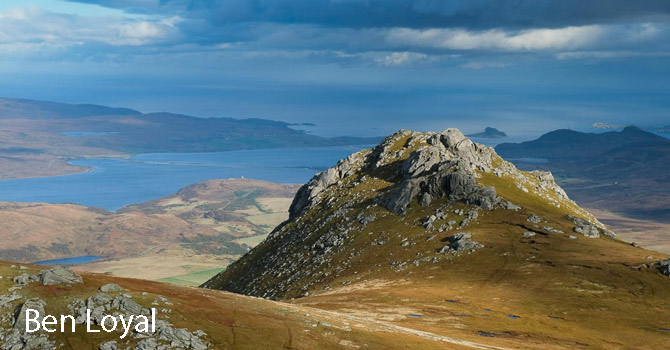 Six hours and four sore knees later we collected the trusty van and carried on.
The driving was pretty easy and fast along this bit and there’s plenty to do as an alternative to bog trotting.
The beaches of Armadale and Melvich looked very good and there’s the Strathnaver museum covering aspects of local history as well as various things to do in Thuso including boat trips.

Thurso has everything you’d expect of a town so is a good place to replenish supplies whichever direction you are doing the route in.

Due to excess sweat and suntan lotion from hiking in 20 degrees plus we finally caved and decided to stay on a site. We stayed on Dunnet Head on a nice site with all the luxuries of electricity and being able to shower for as long as you like.

On Dunnet Head you can go up to the lighthouse and look out to sea to try to spot dolphins or even Orcas or visit Mary-Ann’s cottage which is a preserved window on the Crofting past of the area.