Did you ever hear the one about the English girl the Scotsman and the motorhome? No me neither.
We had been planning to do the North Coast 500 ever since we got our motorhome and saw the beautiful pictures on their Facebook page.
When I say planning, we have mainly been talking about it, no advanced maps or schedule for us. The great thing about motorhomes in Scotland is you can just pack up and go, parking pretty much wherever you want.

So…
The day in stats:
Miles:240
Hours driving:6
Near misses with harbour slipways:1 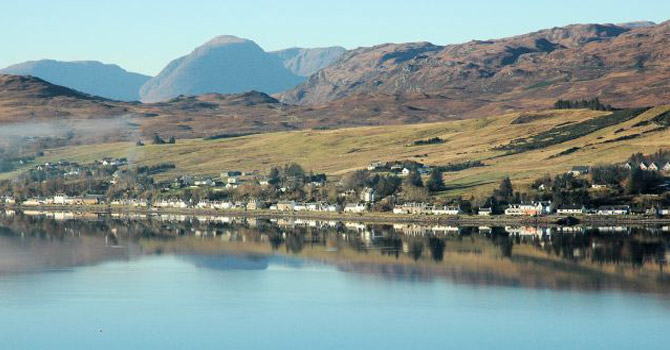 The driving is pretty easy the whole way to Inverness, just beware of rush hour traffic around Glasgow.
Follow the signs for Stirling, look out for Stirling castle and the Wallace monument to the right. Next follow the A9 to Perth then Inverness. Note there are average speed cameras pretty much the whole way along the A9.

After a delicious meal with friend in Inverness, Swedish meatballs that beat Ikeas and courgette cake we set off on the A9 towards Ullapool. We did cheat a little of this taking a bit of a shortcut following the A9 to Tore then the A832 to Muir of Ord to pick up the official route.
The NC500 isn’t signposted so you do need a map and a sat nav.

We followed the A832 then A835 then A832 until taking the turn into the A890 along Glen Carron.
This was particularly beautiful as the sun came out. Alongside the loch we saw lots of deer.

The road takes you to Lochcarron, there’s a Spar, petrol and plenty of places to eat and park overnight along the Main Street.
We decided to take a tiny road beyond Lochcarron to Strome castle. I would strongly advise not doing this.
The castle itself is ruined but picturesque. Unfortunately shortly after this the road ends in a harbour slipway.
Full points the the Scotsman for a six point turn on said harbour slipway!

Tails between our legs we returned to Lochcarron and found a more suitable place for the night.