Submarines, Sea Eagles and some edge of the seat driving.

The Scotsman woke me at five am to see the sun rise over Loch Carron. To be fair it was pretty special and worth getting up for. After a waterside breakfast we left early to tackle Bealach na Ba.
This single track road with hairpin bends and a one in five gradient winds from Lochcarron to Applecross. The views are absolutely spectacular.
We would recommend that you only do this part of the NC500 if you are an experienced and confident driver as some is a bit white knuckle. Overall though it’s well worth it.
If you’re not keen there is an alternative route along the A896 that takes you up to Shieldaig. 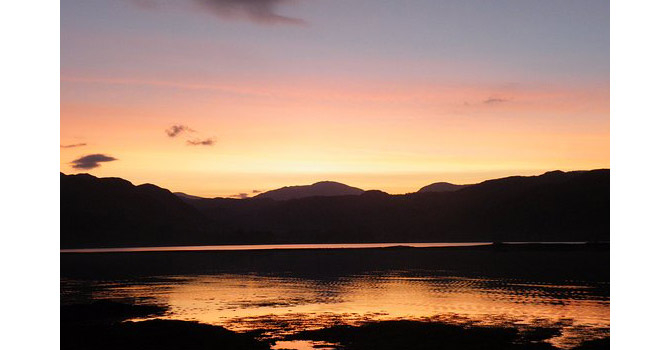 Although we stayed overnight at Lochcarron I just thought that I would mention that there are loads of places to camp along Bealach na Ba and at Applecross as well as a proper site at Applecross.

We stopped at the Applecross Walled Garden and Cafe just north of the village for coffee and cake mid morning. This is a restored Victorian garden crammed full of lovely plants and the coffee and walnut cake wasn’t too bad either! This is a good place to unwind after a tough bit of driving.

After that we pressed on towards Shieldaig. This part of the route runs along the coast of the Inner Sound looking out towards Raasay. It was here we spotted a submarine just before it took a dive. There was a bit of a debate about what it actually was until it suddenly went underwater. We also got a glimpse of a dolphin.

Just before Shieldaig we stopped off at Shards Stained Glass near Kenmore. The gallery is full of beautiful individual pieces for your house or pressies for the family etc.
Shards is part of the South West Ross Eats and Arts trail, there’s plenty more places to visit along the NC500.

After Shieldaig the road gets easier and quicker, sometimes there’s even 2 lanes! 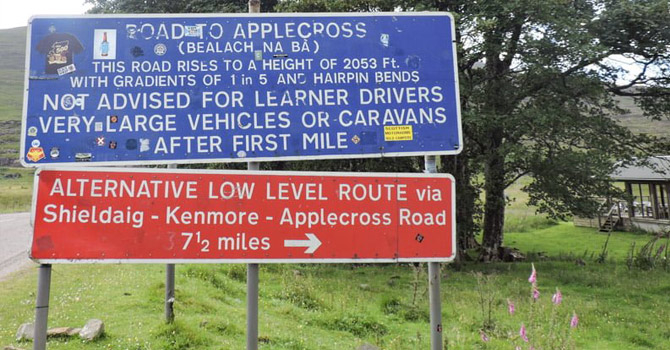 On route to Kinlochewe

We carried on to Kinlochewe and had our lunch by the river. There is a shop, post office, cafe and petrol station here.

After lunch it was on to Gairloch. Along this stretch of the road there as some stunning beaches which were pretty quiet even on a glorious day like today. We can’t vouch for the water temperature however.
Gairloch has lots of things to do: pony trekking, walks and art galleries. Parking in a motor home should be fine.

We then went to Inverewe gardens which are a subtropical paradise with plants from around the world including the Himalayan Blue poppy. A winding path takes you to a jetty into the sea loch. From here we saw a sea eagle circling and herons nesting. If you get lucky apparently you can see sea otters too. There’s a cafe and toilets and designated motor home parking.

We decided to go into Ullapool for dinner and had some pretty awesome fish and chips (what else.) The Scotsman declared them ‘the best in the world’
There is a public car park in Ullapool, near the Tesco store but it has limited space for motorhomes. There is also a fair amount of on street parking. We didn’t have any difficulty finding a space but it may be busier mid summer.
After a walk around the harbour we headed back to Corrieshalloch gorge for the night ready for an early morning walk tomorrow

Day in stats:
Miles:152
Hours driving: 6hr 15 mins
Near misses: one with the jetty at Inverewe (the Scotsman only)